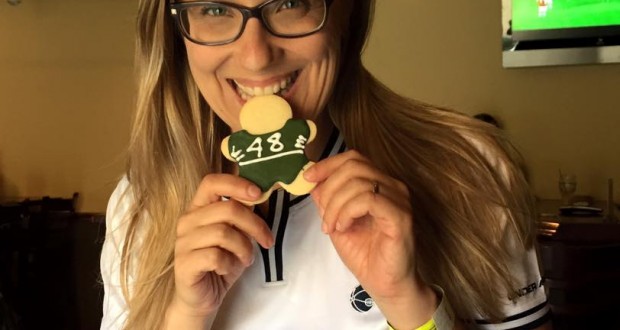 One World – One Team

Where do you live? Chicago, Illinois, USA

Family? Just me, the hubs and our two greyhounds, Gus and Clara.

What do you work with? Sports Marketing Law for Gatorade, a U.S.-based sports beverage company. (I write and negotiate contracts and yell at people who tend to ignore me.)

When and why did you start to support Tottenham? I moved to France when I was 18 and dated a Brit who was a Spurs fan. It was a rather poor season for Spurs and they were facing a relegation threat later in the season. Being a fan of the Chicago Cubs (baseball), I understood the love of a team that had style, but was always struggling. It was a nervous couple of months but Spurs stayed up in the end and I was hooked.

Do you have a favourite player? Past and present. Past: Ledley King, because I was a defender and he always gave it all he had (though Sheringham is a close second); Present: Harry “Never give up” Kane

Do you have any special Spurs memory? I have a lot, but two stand out: 1) being at WHL for the match where Lamela scored his rabona goal (plus Harry’s hat trick and stint in goal); and 2) chanting with Sweden Spurs before the Legends dinner this past April.

What time of the day is kickoff when a match starts 15:00 in London? 9:00—which isn’t too bad. You just have to be mindful not to drink too much or your day is over before it really began!

Is it possible for you to see all matches on TV? If not, how do you follow the team? Yes, thanks to NBC’s deal with the Premier League, we see more matches in the States than they have available in England! But early on, I had to follow them by reading the Times at my university’s library. I started following Spurs before the internet became popular, so it was harder to keep up in those days. 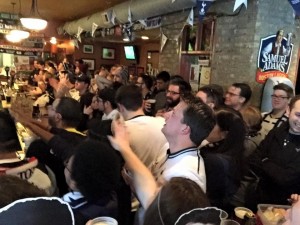 Have you ever been to White Hart Lane for a live match? Yes, I’ve been for 6 matches. I love the Lane though I’m very excited about the new stadium, too. More legroom and wider entrances would not be a bad thing! 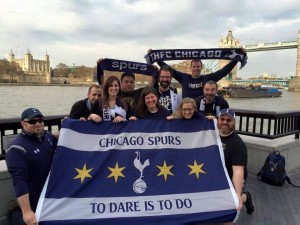 What do you think about last season? I think it was an important step in the right direction. I like Pochettino’s style and I think many of the players are adapting to it well. I like the rapport he appears to have with the players and the fitness level that he demands. I’m still concerned about the mentality of the club in general. Sometimes it seems like the team only brings intensity for some of our larger matches and we end up losing or drawing matches that we really should have won. That ends up hurting us by the end of the season.

What do you think about next season? I’m hopeful! (Of course I am, I’m a Spurs fan!) I’m thrilled we’re focused on building our backline as that’s been a weakness the past few seasons.

What do you think about the new kit? I like the sash design, though I’m not in love with the fit. I liked the fit of the HP kits a little more.

Are there any players that you do / don’t want to leave the club during the summer transfer window? I want to keep Lloris and Kane, for certain. Any players who don’t buy into the style of play that Poch espouses should leave—Adebayor, Kaboul, etc. I was disappointed that Capoue didn’t work out. He was great the first few matches he played for us, but never seemed to come back after that ankle injury.

Are there any players that you want to see in the Spurs colours next season? I’d really like to see us get Toby Alderweireld. Lots of speculation in the past couple of days…(Ann answered the questions before Toby signed) We need another striker, though I’m not sure who might fit in best with our current squad.

If someone from Tottenham Hotspur Supporters Sweden would visit your city, what do you think he or she have to do? Regardless of the season, we’d be happy to show anyone around! In the summer? Explore Chicago’s lakefront. Chicago sits on Lake Michigan, one of the Great Lakes. Almost all of the land along the lake was reserved for public use so there are parks stretching the entire length of the city (except for a tiny stretch right downtown). There are bike trails, running paths, football fields, kids’ playgrounds, prairie gardens, and concert venues all along the lakefront. As a Cubs fan, I recommend going to a Cubs game at Wrigley Field—it’s a great atmosphere! In the winter? ANYTHING INSIDE. Average temperatures are around -10 C in January, though lately it’s been more like -26. Thankfully, Chicago has several world class museums, including the Art Institute of Chicago, great shopping and a fantastic symphony and opera house. A trip to Andersonville would seem appropriate for someone from Sweden Spurs since it’s the Swedish neighbourhood in Chicago. They have a Swedish-American museum, some great Swedish bakeries and many lovely restaurants and bars.

Traditional: Chicago style pizza at Lou Malnati’s, Al’s Italian Beef sandwich, a Chicago-style hot dog, a shot of Jeppsen’s Malört (sorry, but it is a tradition and it was created by a Swedish immigrant to Chicago #MalortUpIfYouLoveTottenham).

What I’d actually recommend to people with taste buds: Frontera Grill (or any other of Rick Bayless’ restaurants—make sure you get the Topolo Margarita), Little Goat Diner for breakfast/brunch, Exit Strategy Brewing Company for beer, Revolution Brewery for food/beer.

Do you have any match-day traditions? I watch all the matches at the Atlantic Bar and I bake for everyone who shows up. Baking helps me relieve stress and I’m stressed for practically every match. I’ve made cupcakes, cakes, coffee cakes, cookies, scones, but everyone’s favourite tends to be my croissants. I only make them for the matches that start later due to the time required to proof them in the morning.

Ett stort tack till Ann för att hon tog sig tid för att svara på mina frågor! På bilden nedan är hon tillsammans med Chicago Spurs och välkomnar Tottenham när de anländer i Denver. (A big thank you to Ann for taking the time to respond to my questions! In the picture below you can see her together with Chicago Spurs when they welcome Tottenham to Denver.) 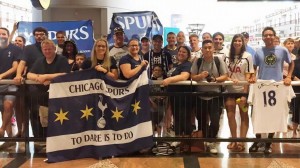 Can’t Smile Without You